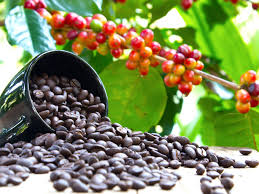 Coffee farmer, Francois Dadi Serikpa from Gnamagnoa in Côte d’Ivoire, joined Nestlé’s Nescafé Plan 10 years ago. The coffee farms that had been in his family for generations were producing poor yields, making it hard for him to earn a good living to care for his family.

Under the plan, he worked hard with Nestlé agronomists who taught him better farming practices and how to grow coffee sustainably. Four years later, Dadi was very proud to have increased his production five-fold, growing more than two tonnes per hectare.

Dadi embodies the success stories of thousands of farmers across 11 countries, who are part of the Nescafé plan worldwide.

Dadi is one of the millions of farmers all around the world facing the threat of climate change disrupting coffee production. To grow properly, coffee crops require specific temperature, light and humidity levels. However, rising temperatures will reduce the area suitable for growing coffee by up to 50 per cent by 2050.

Water shortages have also left some coffee farms abandoned or converted for other uses. In Côte d’Ivoire, coffee production usually peaks at about 100,000 metric tonnes per year, but recently took a severe hit when the seasonable rain pattern reduced supply by 15 per cent.

Africa accounts for about 12 per cent of the world’s coffee production and the high-quality and taste of coffee from the continent are loved by coffee connoisseurs worldwide. Côte d’Ivoire alone is the largest coffee producer in West Africa and the third largest in Sub-Saharan Africa. However, scientists warn that without conservation, monitoring and seed preservation measures, millions of coffee farmers on the continent could lose their livelihoods, impacting the quality of their lives and their families.

To help revitalize coffee production on the continent, much work is currently underway to boost production, which will improve the incomes of coffee farmers and encourage young people to pursue a career in coffee farming, eventually improving economic development across the region.

Agricultural techniques, such as adapting the coffee tree crop formation including the structure, number of branches and canopy shapes, have been introduced to enhance growth. Group training, individual farmer coaching and farming tools have also been provided to Ivorian coffee farmers to encourage the advantages of the correct pruning and maintenance of plantlets and trees.

In the Democratic Republic of Congo, Nespresso also recently announced a long-term commitment to revive the country’s coffee industry, support Congolese farmers and restore production in regions that are under threat.

Last year, the Inter African Coffee Organisation (IACO) teamed up with the Centre for Agriculture and Biosciences International (CABI) and the International Coffee Organization (ICO) to launch a multimillion fund to support Africa’s coffee industry.

In 2018, the Ministry of Agriculture in Côte d’Ivoire introduced a pruning campaign to provide support to coffee farmers and set a target to achieve 350,000 metric tonnes of coffee production. Although this goal was not met and coffee supply volumes continued to decrease, this kind of action to kickstart production is welcome because without collective action, the future of high-quality coffee looks bleak.

“The coffee industry, including exporters and producers, together with governments in Africa, and worldwide, must all work swiftly as one to tackle climate change. It is highly important to Nestlé, which is why our CEO, Mark Schneider has signed on to the UNs ‘Business Ambition for 1.5°C’ pledge to achieve zero net greenhouse gas emissions by 2050. We commit to such sustainability goals to advance the health of our planet, drive societal progress and support a sustainable, healthy food system”, said Fatih Ermis, Head of Agricultural Services for Nestlé in Central and West Africa.

“Working together, we will be able to empower and provide long-term support to local farmers and their communities to rebuild their coffee industries and local economies, while meeting growing demand for coffee in Sub-Saharan Africa. All of these steps will go a long way to help fulfil our purpose of unlocking the power of food to enhance quality of life for everyone, today and for generations to come.”