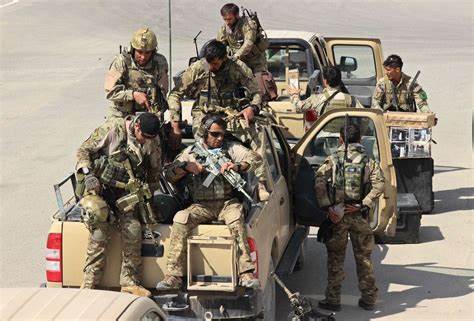 President Biden will be bringing world leaders together for a virtual Summit for Democracy in December, the White House announced early this week as part of the administration’s efforts to tackle authoritarianism, fight corruption and advance human rights.

The War in Afghanistan has always been a black-box, but the Biden administration just made matters worse.

According to an admission obtained from the State Department, Biden officials recently directed federal agencies to scrub their websites of official reports detailing the $82.9 billion in military equipment and training provided to the Afghan security forces since 2001.

The scrubbed audits and reports included detailed accounting of what the US had provided to Afghan forces, down to the number of night vision devices, hand-grenades, Black Hawk helicopters and armoured vehicles.

The State Department admitted to removing the reports but justified the move as a way to protect Afghan allies. According to a spokesperson:

“The safety of our Afghan contacts is of utmost importance to us. The State Department advised other federal agencies to review their web properties for content that highlights cooperation/ participation between an Afghan citizen and the USG or a USG partner and remove from public view if it poses a security risk.”

It’s worth noting that the Biden administration already put these partners at risk when officials provided lists of Afghan nationals to the Taliban in a misguided attempt to clear them for evacuation. The Taliban, a known terrorist organisation with a history of murdering Afghan citizens working alongside US forces, should never have been trusted with those names.

In addition, many of the removed audit reports merely quantified military equipment without identifying personnel. Here are two important examples:

*Government Accountability Office (GAO): OpenTheBooks.com reposted an audit of US provided military gear in Afghanistan in August 2017 after it was removed from its official location.

*Special Inspector General for Afghanistan Reconstruction (SIGAR): OpenTheBooks.com reposted an audit of $174 million in lost ScanEagle drones in July 2020 after the report was removed from its official location.

US taxpayers paid for these audits and the US-provided equipment and citizens should be able to follow the money and hold the Biden administration accountable.

A GAO spokesperson also confirmed in a request for comment its receipt of the directive, “The State Department requested we temporarily remove and review reports on Afghanistan to protect recipients of US assistance that may be identified through our reports and thus subject to retribution.”

One deleted GAO report was four years old and quantified US-provided gear into Afghanistan between 2003 and 2016. It was delivered to the House Armed Services Committee on August 10, 2017.

The report was pulled down only hours after we, and other news outlets like Sinclair Broadcast Group SBGI, highlighted the report’s existence. A spokesperson for SIGAR also admitted via a request for comment that the agency pulled reports offline

“In recent days, some SIGAR reports have been temporarily removed from the agency’s public website due to ongoing security concerns in accordance with guidance received from the US Department of State. This is in line with actions taken by other US federal agencies and is out of an abundance of caution.”

Again, to reiterate, these reports do not include recipient information and the Taliban already likely controls the war chest in question.

This directive doesn’t seem to be designed to protect our Afghan allies, or, if it is, it’s been poorly executed. One US entity that we will not name has failed to remove a report detailing the Afghan forces by rank. That report, one could argue, could be used as a tally sheet for retribution, but it’s still publicly available.

Here’s another example. One federal report did not include personnel info, but it did include the face of an Afghan pilot sitting in a US Black Hawk helicopter. When we highlighted the report, we flagged the photo to an agency spokesman and chose not to post a link to protect the pilot’s safety.

The report has remained online, but since we contacted the spokesman, the photo has been removed.

If the Trump administration started vanishing government reports and justifying their actions with weak, obviously political excuses, can anyone with a straight face say it wouldn’t lead the nightly news?