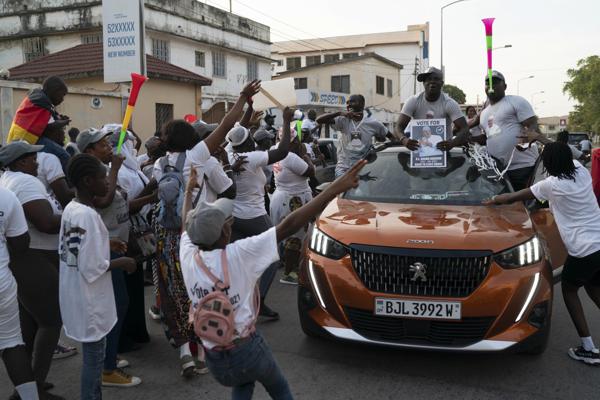 Gambia’s President Adama Barrow has secured his re-election with a comfortable margin over his opposition in a vote that set the bar for a new chapter in the small West African nation’s democracy.

Barrow won about 53 perc cent of the vote in Saturday’s election, according to results from the Independent Election Commission announced on Sunday. He easily beat out his main contender Ousainou Darboe of the United Democratic Party who received about 28 per cent of the vote.

This was the country’s first presidential election in decades that did not include former dictator Yahya Jammeh, who now lives in exile in Equatorial Guinea after losing the 2016 election and refusing to accept defeat.

The Chairman of the IEC, Alieu Mommar Njie, announced the results and prayed for peace to prevail in the nation of about 2.4 million people.

“I hereby declare Adama Barrow duly elected to serve as President of the Republic of The Gambia,” he said, after indicating that the National People’s Party (NPP) emerged victorious with 457,519 of the votes cast.

UDP’s Darboe was credited with 238,233 votes, and Mama Kandeh of the Gambia Moral Congress party came in third with 105,902 votes, according to results announced by the IEC. Demba Sabally, who represented the NPP at Election House, said the presidential election was transparent and fair.

“Gambia is the winner of this election,” he added.

The results, however, have already been contested by four opposition leaders, including Darboe and Kandeh, who on Sunday held a press briefing to challenge the credibility of the vote. According to a statement from the parties, they were concerned about an “inordinate delay” in the announcement of results.

Campaigner Banka Manneh told The Associated Press that he would not deny the opposition leaders their rights to protest. But, he added, “They need provide the evidence of their claims. The courts are here to settle disputes.”

“President Barrow is a man of peace. We have to give him a chance to continue his development projects,” Modou Ceesay, 36, a resident of New Jeshwang told AP.

Fatou Faal of Kanifing told the AP that Gambians did the “right thing in giving Barrow a chance to complete the development projects he initiated.”

Nearly 860,000 Gambians came to vote on Saturday, a high number that shows a determination for many to exercise their democratic rights as demands for justice in the post-Jammeh era rise.

Barrow emerged victorious in 2016 as the candidate for an opposition coalition that tested the 22-year rule of Jammeh. After initially agreeing to step down, Jammeh resisted, and a six-week crisis saw neighboring West African countries prepare to send in troops to stage a military intervention. Jammeh was forced into exile.

Jammeh’s two-decade rule was marked by arbitrary arrests, enforced disappearances and summary executions that were revealed through dramatic testimony during Truth, Reconciliation and Reparations Commission hearings that lasted for years.

The other week, the commission handed its 17-volume report to President Barrow, urging him to ensure that perpetrators of human rights violations are prosecuted.

Barrow has vowed to fight for justice for the victims.