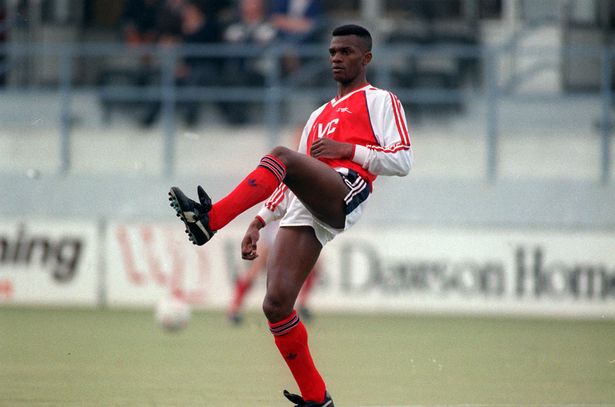 Paul Davis, an Arsenal midfielder who played almost 450 times for the club and swept the board with domestic honours, was one of English football’s black trailblasers.

Having emerged from the club’s apprenticeship scheme at the start of the 1980s, Davis came of age during the height of English football’s racism problem, where away grounds could become bear pits for black players who were still relatively scarce.

It was a time when young black players had to endure not only racist chanting from the terraces but also the “banter” from inside the changing rooms where they were outnumbered by older, white colleagues. Davis felt compelled to call out instances of racism and discrimination where he found them.

“That willingness to go and delve into that discomfort is the challenge that we all face and that’s something I’ve faced throughout my life looking back on it,” he told Reach PLC’s podcast D&I Spy – Inclusion, Uncovered.

“I’ve faced so many challenges, at the time when you’re younger, you don’t actually think about it you just go for it but as life goes on, you get older, you get to my time in life, you look back.

“Personally, I had to challenge [it]. I spoke about how difficult that is, when you’re trying to make your way and you’re 16, 17 in a room where everyone else is different to you white, middle-class men at the top of their game, professional footballers, there’s a challenge there for me.

“How you deal with those challenges and how they come along is interesting. I chose to challenge it at times when it was right and I felt that I could. You have to pick your moments when the numbers are against you, that’s something you learn to do. You can’t fight everything you can’t challenge everything.

“For me, I challenged at the right moments that I thought I had advantage in doing so. I didn’t feel like challenging when nothing was going to come of it, it’s not going to be any use to me, I had to pick my battles and I did challenge.”

The cultural landscape was very different in those decades past where even mainstream media carried racist tropes which would then end up being endorsed in the workplace.

“I remember TV programmes were full of it,” Davis says. “Everywhere you looked in terms of entertainment had splatterings of jokes, banter that was offensive to some people. It was more of a cultural thing I remember programmes like Love Thy Neighbour which was a programme where a black family and a white family live next door to each other.

“It was like a sitcom and it was constantly banter towards the black family about all kinds of racial stuff. That was mainstream TV at seven in the evening.

“You’ve got to remember, there were four stations and 25 million people would watch that programme. It wasn’t like now, a programme does well to get seven or eight million but then it was so concentrated.

“So you’d come into your place of work, mine was the training ground, everyone would be joking about last night’s programme because everyone had seen it so it was that kind of culture and society that we were in.

“It has changed coming forward to where we are now, that banter – although I’m not in the changing room on a day-to-day basis, I am involved in the game and I work with coaches, players – I don’t think I’ve seen that, the banter I’ve had towards me in the dressing room.

“I can’t remember the last time I’ve seen that so that’s gone out, from what I’ve seen, it’s gone out of the game in the dressing room.”

Davis would have to endure the taunts from the terraces on away days and empathised strongly with his black peers while also drawing on lessons learned by the earlier generation of black players who went before him.

“Back when I was playing and I was getting abused, to be fair it was when I went away, I never felt abused at Arsenal, I didn’t feel the fans were abusing me for my colour,” says Davis.

“I do remember getting booed for my performances – they want a performance and if they don’t like it, they’ll boo you, that’s football – as for my colour, I never felt that amongst Arsenal fans to me.

“When I travelled to different parts of the country back then it was horrendous. I remember going to so many grounds, particularly north, some in the south, where the majority of the fans were of that team and it would be all of them abusing, racially abusing me on the pitch.

“I think the lead up to a game of that type is tough because you know it’s coming, you know you’re going to get abused by a large section, say 90 per cent of that crowd.

“Say, there were 60,000 regularly at away games and 50,000 whenever I got the ball would make a noise or a chant so mentally, you have to find a way to deal with that, some don’t.

“I remember playing at Chelsea, early 80s, in the Arsenal first team, I’d have been in my first or second season. I was the only black player playing for Arsenal at Stamford Bridge in front of probably 60,000 people but there’s 55,000 Chelsea.

“I got the usual stuff when I got the ball and 55,000 racially abusing, booing, whatever they’re trying to do to get me off my game. But that was normal in the sense that at the time, it happened at other grounds as well so I had to adjust myself to that every time and prepare myself for it.

“What really struck me in that game was Chelsea had a young black player who was a substitute for that game, Paul Canonville.

“I write about this in the book because it stuck with me and he was warming up to come on the pitch and his fans were booing him, racially abusing him and I still remember to this day, I was in the game thinking ‘this is crazy’, his own fans.

“It’s crazy enough I’m getting abused but for his own fans to have empathy to understand is crazy. I think his career, going down the mental side, didn’t take off. He was a great talent, he went on through depression, he’s written his own story.

“My point really is, the mental side is strong in sport, you have to be strong mentally in sport, as a black player back then you needed to have another sort of mentality.

“We all found different ways of getting through that and there’s guys like Cyrille Regis, Luther Blissett, Brendon Batson, those guys were a little bit older than me but they were role models. I was always looking at them to see how they were dealing with stuff.”

The former title winner has just released his book Arsenal and After – My Story, which details his near-half century in elite football circles interspersed with messages of inspiration and guidance for the generations coming after.

Davis is encouraged by what he sees as progress within the game of football where he feels overall displays of racism and discrimination are becoming less prevalent. However, he realises that the organisations need more resources.

“One of the things that I’ve learned is that the great organisations do great work but they never get any funding, look behind and look at the funding to support them – it’s painful,” he admits.

“I was in admiration for what these organisations were doing under such limited resources and I don’t think many people know how small the resources are because it’s not really discussed, no one really talks about it.

“When I first started, everyone was saying we support Kick It Out, we support all the football organisations, but then when you find out what the actual support is, the figures, it’s really little, a million-pound business and you’re talking in thousands.”

Now working as a coach developer and mentor with the Football Association, Davis is charged with helping and supporting senior players through their coaching qualification such as the UEFA A Licence and the UEFA Pro Licence – the highest award available.

Davis is impressed by the example set by the England manager Gareth Southgate, who has been a vocal advocate for equality and anti-racism within the game.

“I see how difficult it is for people to have these discussions around these topics so I’ve got nothing but admiration for people who step into it” says Davis. “I think it takes courage because it’s trying to make change or have discussions about things that are uncomfortable which, for me, is a brave step.

“So Gareth has done that throughout his time at England with many different examples. I think someone like Gareth is exactly what we need for this type of stuff and he’s been prepared to step up, be brave and try to change things.”